So it all started about 2 months ago when my boss, Dustin, gave me an old mountain bike that he didn’t use anymore. It was used, abused, and needed a little work but I took it because it would be fun to fix up and start riding. I adjusted the brakes so I wouldn’t die on the down hills I would eventually fly down, made it so the chain didn’t caught up in the wheels when I shifted, and put new tires on it because the old ones looked like they were sitting in a garage for 4 years without any use (4 years is actually about right). 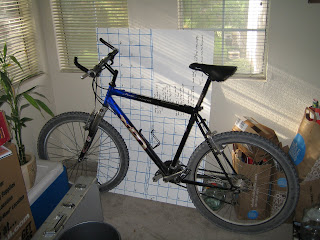 Now with a smooth operating 2 wheeled steal beast at my command the only thing I needed was a route and destination to test her out on. I set my sights on a little visited limestone climbing crag “behind” my house that hosts about 20 top quality 5.9 – 5.12 routes. I say “behind” my house because I did not know exactly how far, how to get there, or if I could even get back to this crag. Since the current guide book for the area was published in 1995, things here in the sleepy hollow know as Las Vegas have changed quite a bit. The map shows only a few dirt roads, no homes and a small limestone quarry in the area. Now, as I have found out, there are about 500 homes, many paved roads, and a HUMONGOUS hole in the ground that was once a small quarry. With all these obstacles, I still found it to be a good idea to get on Suzanne (my aptly named steal beast) and see if i could find this crag.

The first of a my many adventures stretched out over the next 3 weeks in the search for awesome climbing ended quite abruptly when I found out that biking up hill for 6 miles and gaining 2000 feet of elevation in 100 degree heat is really really hard! I quit before I got to the dirt. After a couple of days I was ready to try again. This time I made it up and away from civilization but somehow ended up in the wrong canyon. Try #3: Took the wrong road and got cliff-ed out. Try #4: turns out I was on the correct road but decided to take a right instead of going straight and found a really spectacular view of Vegas but no climbing. Try #5: Gave up somewhere in the middle of the desert due to lack in interest and swollen knee. 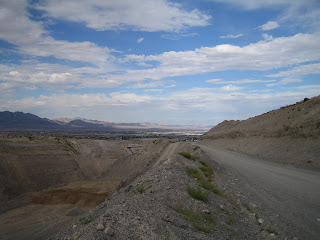 Try #6: I was done with this crap. I made up my mind that I wouldn’t be coming home until I found this place! I headed out mid-afternoon to give my self plenty of time, brought extra water, granola bars and a truck load of determination. SUCCESS! After 7 miles of up hill road travel, 3 miles of up hill off road biking, 3 miles of hiking through the desert ( I ditched the bike), and half a mile of slot canyons and after a few surprises, NIRVANA….. 100 foot limestone sport routes, in a beautiful secluded 50 foot wide slot canyon!!!!!!!! There are 2 areas for climbing, Trenchtown (no listing on MP.com) and Waterworld both with beautiful, long, challenging looking lines, and no people! Mountainproject lists the routes as easier then guidebook. Just have to climb them to find out…. 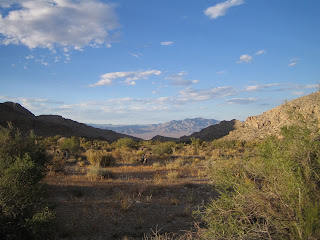 The bike ride home was great, ALL DOWN HILL!! I’m a little sad that I actually found the crag because it means the adventure of finding the place is over but excited to take some other climbers back to this “back country” crag to do some climbing! I did take some pictures of the actual climbs but it was late in the day and none of them turned out. Looks like if you want to see this place you are going to have to come out and experience it for your self. Any takers?

kris - Damn! Do you think there might be a more direct approach? (Though, the slot canyons do sound fun.) Either way, I'd be up for checking it out in more human-friendly temperatures. Once it cools off a little, I'm there.July 28, 2009 – 7:51 pm