If you’ve sat around the campfire with me, you’ve probably heard The Legend, a “true” story about the harshness of nature & the strength of one man. Below, for posterity, is the written word.

*Author’s note: The piece was written with a comic book hero in mind, hence the Machismo. The setting is my favorite climbing area, Upper Dream Canyon in Boulder Canyon.

Story after the turn

The Legend
Based on a “True” Story
By Eli Powell

It was not yet winter. High above the Boulder Valley, in the foothills of the Rocky Mountains, the community of Sugarloaf braced for the long, cold season ahead. It was November 28th, the day after Thanksgiving, so-called Black Friday by retailers and shoppers alike. In Sugarloaf, a sleepy community with widely spaced homes and without any stores, Black Friday was just another day, save for the leftovers.

A steep, winding road shares the town name, and is the only passage through the surrounding forest and hills. The road is lined with weathered mailboxes of muted greens and grays. These boxes serve as the only marker of cottages beyond, down non-descript dirt roads. One such road is Lost Angel. Lost Angel sweeps through the charred remains of a pine tree forest. Yellow grasses push on the road and blow in the wind.

A wooden fence lines the road, with an occasional break for a driveway. A faded plywood sign, not bigger than a sheet of paper, is nailed to a tree. The sign is factual more than ominous, reading “There are Lions and Bears here”. Further down the road, a small pull-off is evidence of the canyon beyond.

Dream Canyon is a cut in the earth; a narrow granite canyon with a crystal creek in the depths. The creek runs all year, cold and clear, thanks to snow fields in the high country.

And now it was getting late. Dusk comes early this time of year. A silent snow began to fall. We packed up, and started hiking out. A small boulder field guarded the start of the dusty trail. After this, a downed tree, slowly decaying, and blackberry bushes passed. Oak trees, pines, and innumerable shrubs crowded the trail. We pressed on in the waning light, stepping over loose rocks and exposed roots. The trail is, at times, steep enough to reach out and touch the ground in front. There’s a squeeze between an old cattle fence, and a steady oak tree, before the trail opens and the grade lessens.

Past the squeeze, I was first to see it; still, staring, a moment of calm. “Stand back,” I commanded, gesturing Amy behind me.

“What is it?” But my fixed gaze answered her question: A Mountain Lion, a Man Eater, large and sculpted, 30 feet ahead. 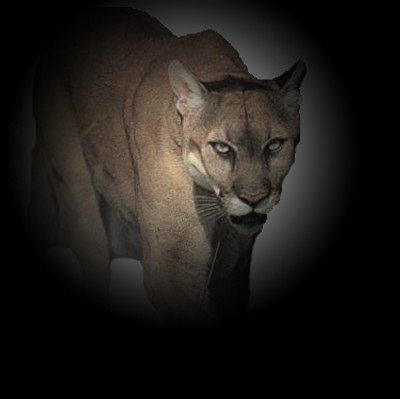 “Amy, get me my axe,” I said, stoic, stronger now. She reached inside the beat up orange pack, and produced a hatchet, small and sharp, and handed it forward.

Eyes locked on the Beast, I ordered, “Get me my helmet,” she abided, placing the helmet upon my head, grimacing.

The Lion, closer now, with hungry eyes sunk and ears tucked back, looked determined. Someone was going to DIE.

“COME ON! COMME OOOOONN!” I screamed, shifting weight between forward and hind legs. The Beast showed his teeth, yellow and sharp, framed by his muscular jaw. His claws pushed forward, out of his paws. Back crouched, ready to spring. I raised the axe in my left hand, right arm out front, shielding.

“COME OOOONNNN!!” I cried out. The lion pounced as I charged. He leapt 15 feet, teeth sank in, the force powerful, with paws on chest, falling back, I swung the axe. Cutting through the air, the axe struck the beast with great force, adrenaline fueled, the battle continued, as we tangled down the hill, fighting for every blow and breath. Claws pierced everywhere, the noise was terrible, screams of pain exploded from within, the beast went for my neck, and missed. Another strike and everything was dark, the monster’s jaw surrounding my face, teeth in hair, “NNNOOOOT TO- DAAAYY”, and the energy came. Hands gripping the beast’s skull, I flipped him backward at terrible speed. The beast loosened his grip, slowly, then retreated to stillness, eyes glazed, coat bloodied, the beast was dead.

The dust settled, I found Amy, in shock, clutching a rock, pushed against the fence. With my good arm, I pulled her up into my body, and quietly spoke “It’s okay”, we stumbled to the car in silence, made passionate love, and drove to the hospital, “I love you”.

Tyler - This reminds me of Sean Jackson's factual account of sleeping with a paraplegic on a swing. Well done.December 23, 2009 – 6:26 pm

Eli Powell - glad you guys liked it. Talk to you soon.