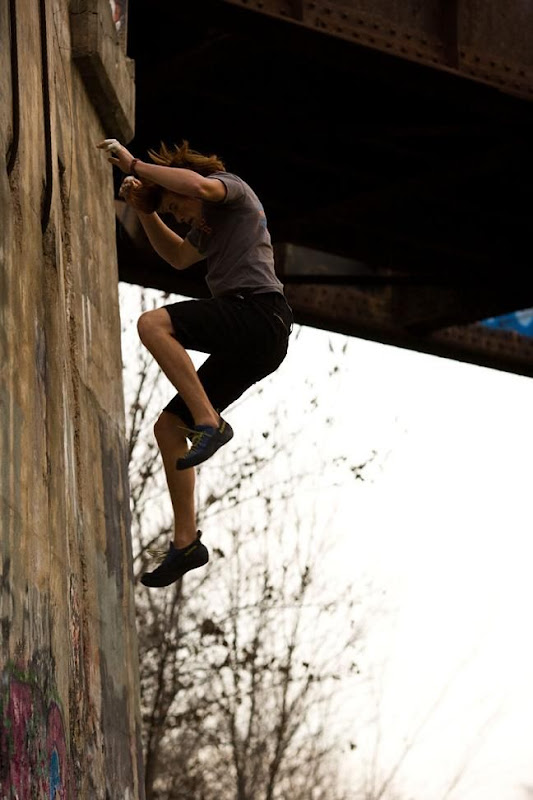 It’s flat, it has no rock, it’s Nebraska.

Several years ago while walking my dog at Wilderness Park (Lincoln, Nebraska) I spotted an intriguing crack splitting the center of an old railroad bridge foundation. I was new to climbing but quickly saw the potential of this 20+ foot high finger sized problem. I slotted my tips into its flesh ripping lower portion and concluded my only chance of success would be an aid ascent. After several aid solos (first ascent on stoppers, a few more on cams) I left the crack to the spiders and prickly raspberry bush that guarded the top. Occasionally I’d mention the crack’s existence to my fellow flatlanders but never showed them until recently. 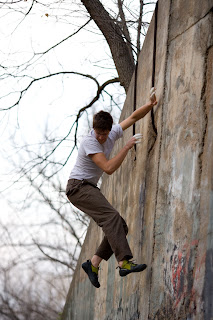 On a warm and cloudy afternoon we went to check it out. We taped up the fingers and began sussing out the moves. It had been a few years since I had given it a try, that had resulted in a badly sprained ankle while falling form the top.

Stephen, Adam, Al and I gave it several turns. Each of us reached the cruxy highpoint rather quickly. A few attempts later sees Stephen slap the top and stick the dicey mantle. Success! Physical Graffiti (5.11) was born.
Here’s a few pics of Stephen, Al, and Mike giving it a go. 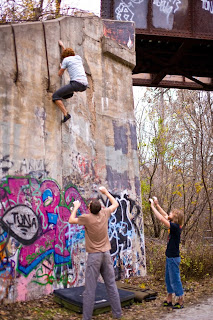 Doug - Thanks guys. Personally I'm surprised the pics looks as good as they do. It was actually pretty dark at this point (cloudy, near sunset). Stephen wants to get back out there and try leading it with cams.December 4, 2009 – 7:55 am