The Buzz About Boulder Canyon

It’s been two years since I’ve regularly climbed in Boulder Canyon. With that time and much improvement under my belt, I’ve had a great time rediscovering the hard granite sport climbs down the road. 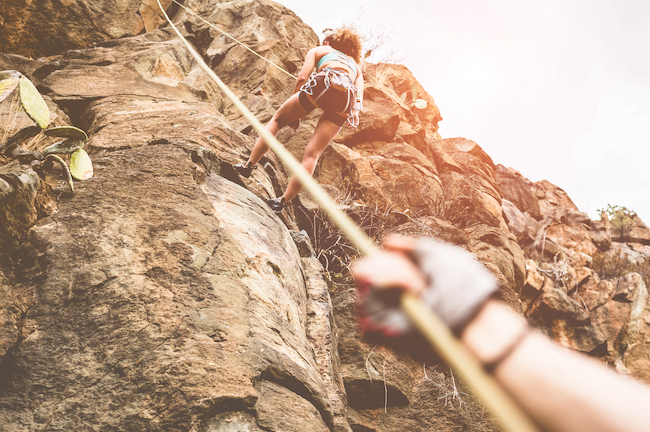 Tyler Scheer has been honing his photography skills by producing some amazing images of the lines we’ve been getting after.

The Buzz (5.12d) sits in a beautiful striped alcove on Bitty Buttress. The deviously overhung line packs a serious punch in a short distance. It’s a true race to the chains with a tough throw to a crimp off a big drop knee, followed by a cranking to a high foot. The rest is 5.11+ and can definitely spoil an early celebration. The 5th attempt proved to be the charm as an evening stroll to the crag after work paid off in the setting sun.

Close your eyes if you don't want beta - The Buzz crux.

Just upstream from Bitty Buttress is Blob Rock, home to a number of good single pitch and multipitch sport, mixed and trad lines.

Two fun sport lines that share the first two bolts are Respite (5.11d) and Jolt Cola (5.12a). Jolt Cola is listed as two pitches in the guide book, but there is no reason to break up the climb. With a 60 meter rope, both pitches can be linked with enough to easily get the climber back to the ground. Doing Jolt Cola in one shot makes for one of the best 5.12s in the canyon and I was trilled to get the onsight.

Getting started on Jolt Cola

The first half of the line involves tenuous, slabby climbing while the second half scales a huge roof. The variety and sustained nature of the route truly make it a classic.

Resting up for the final push on Jolt Cola

The hike to the base of Blob Rock puts you several hundred feet away above the riverbed, far from the road and with a beautiful view down on Cob Rock. The area has a different feel than many other Boulder Canyon locales with some of the climbs being a bit run out and requiring gear.

Flowers along the Blob Rock trail

We also recently visited Security Risk crag in Boulder Canyon, home of more quality harder sport climbs. I took advantage of the draws Ian hung to onsight Plan B (5.12b). Ian soon followed suit and fought his way through clean as well. I’d like to make a return trip to Security Risk soon.

Ian catching some sun on the techy Plan B

As a climber who got his start at the climbing wall at the University of Nebraska, and perennial wintertime gym rat, it’s always fun to go hop on some gymnastic lines and go for it.

Starting the buisness on The Buzz

Tyler and Tommy are looking forward to working Jolt Cola and the equally classic Rise and Shine (5.12a) in the Bitty/Blob area. They are both climbing strong and I can’t wait to see them making progress on some great lines.

Tyler on the Respite crux

Thanks a ton to Tyler for some fantastic photography work.

Tyler - Thanks for putting these up, Adam! And thanks, Doug. It’s a pretty area, with good spots from which to shoot.

Tommy O - Climbing with you brothers has become a thing that I cherish moment to moment while happening, knowing all the while that I will also be cherishing these memories for a lifetime. Thanks for the post and pictures. Can’t wait to get to it on Jolt Cola and Rise and Shine.July 6, 2011 – 12:56 am

WillO - Wow, great pics and great lines. So pumped to know you amazingly talented and awesome gents. It is an honor to watch y’all climb!July 22, 2011 – 4:33 pm