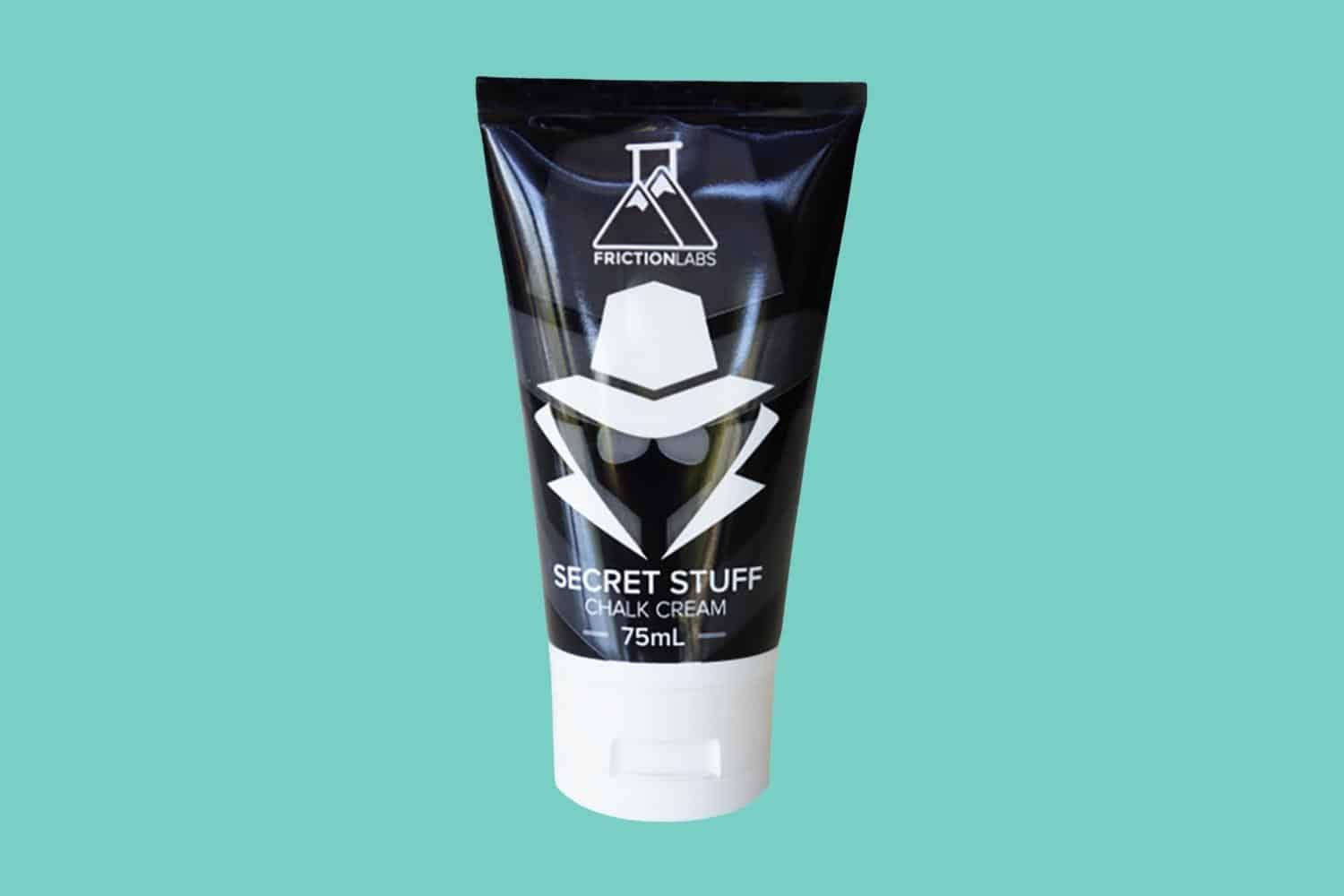 Friction Labs Secret Stuff is one of the most popular liquid chalk right now. This review goes over the alcohol-free and 80% alcohol content products to determine if they are worth the hype and, more importantly, their price.

9.4Expert Score
Excellent liquid chalk for high-performance and sensitive skins
Many climbers are familiar with Friction Labs’ Unicorn Dust powdered chalk and its superior performance. Those who have switched to liquid chalk for the many benefits it offers will be pleased to know that Friction Labs has crafted one of the best products on the market so far: Secret Stuff.

Available with and without alcohol, Secret Stuff liquid chalk has a thicker cream-like texture that offers enhanced coverage for a better grip during your climbs. Not only is the friction better, but it also lasts longer than regular liquid chalk. While it may not be enough for a full climbing ascent (like any liquid chalk), it will be sufficient to solve an entire bouldering problem.

Last but not least, Secret Stuff is undoubtedly one of the top liquid chalk products for sensitive skins, especially in its alcohol-free version. It also contains no weird additives; it’s 100% vegan and made in the USA.

Overall, Friction Labs Secret Stuff is a premium high-performance liquid chalk. Although it’s a bit expensive, we do think it’s worth it. If you’re on a tight budget, it’s an excellent solution to use it as a base layer and combine it with cheaper loose chalk.
Grip
9.5
Coverage
9
Staying Power
9.5
Skin Friendliness
9.5
Value for Money
9.5
PROS
CONS

Liquid chalk has become more and more popular within rock climbing in recent years. Part of this is because liquid chalks are far more practical than dry chalks in several ways. Liquid chalk lasts longer on your hands, is easier to transport, less messy, and is easier to apply and remove than regular dry chalk. Besides, the fact that you don’t inhale a lungful of the stuff every time you use it doesn’t hurt!

Friction Labs is a US-based brand that manufactures climbing chalk and accessories. The brand’s 80% alcohol ‘Secret Stuff’ chalk cream is its latest entry into the climbing market. Friction Labs also offers a new formula without alcohol. Top athletes from around the world use these products, and they consistently receive rave reviews. But do they hold up the hype?

In this write-up, we discuss the attributes of Secret Stuff. We will also discuss how it can help you attain better performance while climbing. If you’ve been trying to figure out whether or not Secret Stuff is for you, read on to find out more.

The uniquely creamy texture of Secret Stuff makes it possible to get a much more even coverage than you can with regular chalk. With climbing chalk, you will often get much patchier, looser coverage. As a bonus, the formula dries quickly, so you can get back to climbing right away.

The new 80% alcohol Secret Stuff formula is more than just climbing chalk. It contains enough alcohol to meet the WHO’s standards for hand sanitizers during a public health emergency. We think this is a great way to protect yourself from COVID if you climb at gyms or popular spots as it naturally cleanses your hands. It also helps with getting rid of the gunk that builds up on your hands as you climb.

Secret Stuff makes it possible for you to deliver chalk deep into every nook and cranny of your hands and fingers. You can get a perfect layer of coverage with the product. This, in turn, creates a far better grip for your climbing than if you were to use regular climbing chalk. If that’s not enough, you can use the product as a first layer and apply standard chalk as well.

Secret Stuff doesn’t just work as climbing chalk. It also protects your hands from cracking and other forms of wear and tear. If your hands tend to crack or bleed after a climbing session, this point is well worth considering.

Climbers with sensitive skin often struggle to use liquid-based chalk formulas. We found that Secret Stuff was much less irritating or drying than most types of liquid chalk. This might be due to how thick the formulation is or its alcohol concentration.

One of the best things about Secret Stuff compared to other liquid formulas is how thicker it is. Most kinds of liquid chalk are pretty watery and, therefore, somewhat messy to apply. This also means that liquid-based chalk tends to rub off quite quickly, so you need to reapply it constantly.

Friction Labs markets Secret Stuff as a chalk cream, which is a perfect description of the product. It is much thicker and smoother than other types of alcohol liquid chalk, and you see the difference in its performance. Simply put, Friction Labs’ offering lasts much longer than different kinds of liquid chalk that we have tried.

Once applied, Secret Stuff should last for your whole session if you use it as a base layer. This is likely because your hands stay drier when you use liquid chalk. Sweat is generally one of the significant factors that determine how long your chalk sticks or not.

Secret Stuff also has excellent staying power as a chalk replacement. This is especially true when working on shorter projects and climbing in drier climates. For example, if you’re bouldering, you should be able to get away with just using Secret Stuff for the whole session. Even in humid climates, you will find that you need fewer applications than with other generic chalks.

At first glance, you’ll likely notice that Secret Stuff is one of the more expensive types of liquid chalk out there on the market. However, we would still argue that it’s ultimately great value for money; a small amount of the formula goes a very long way. For example, we would generally only need to use a pea-sized glob to cover both hands thoroughly. This amount would often last multiple ascents (maybe even an entire session if you use it as a foundational layer).

All About the Ingredients and Production

Secret Stuff contains only responsibly refined high purity magnesium carbonate. This guarantees that the formula is a high-performance product that will help you consistently perform at your best.

Plant-based climbers will be pleased to know that Friction Labs’ formula does not contain any animal products whatsoever. It wasn’t tested on animals either.

It’s pretty standard nowadays for regular chalk to contain fillers and drying agents to give the product more body. Unfortunately, these unnecessary fillers can make such products harsh and irritating for the hands.

For example, many liquid chalks include rosin (colophony), a resin that can cause allergies for some people.

Fortunately, Secret Stuff is entirely free of these additives.

Handcrafted in the United States

Friction Labs liquid chalk is expensive. It’s almost like a luxury item with a price of ~$19/75 ml, especially for climbers on a budget. However, it’s good to know that Friction Labs handcrafts its liquid chalk in Colorado, weighing on the manufacturing cost. This explains the price difference with other liquid chalks made in China that are more affordable.

When Should you Use Secret Stuff? For Indoor or Outdoor Climbing?

Something that we loved about Secret Stuff liquid chalk was its flexibility. On the one hand, you can use chalk cream as a total chalk replacement in dryer climates. In addition, you can apply the product as a foundational layer for standard chalk. This helps you stick to the wall or crag.

Secret Stuff is so versatile that you can use it for any climbing. However, we feel that it shines on its own in dryer climates or when indoor climbing. The product also works very well for shorter bouldering problems.

That doesn’t mean that you can’t effectively use the product in more humid climates, though. Secret Stuff makes a fantastic base layer for generic chalk. Using both kinds of chalk together should make your loose chalk last far longer. It also gives you a backup layer when your loose chalk rubs off, potentially buying you a few extra moves.

The alcohol-free formula of Secret Stuff would be an excellent choice for anybody with eczema or similar issues. However, we feel that its performance is significantly less impressive than the original formulation. It’s much thinner and has more of a gel consistently. We found that it didn’t last anywhere near as long as the original formula. Unless you’re deliberately trying to avoid isopropyl alcohol, we recommend sticking to the 80% alcohol formulation.

There are some minor performance differences when using an alcohol-based liquid formula compared to an alcohol-free formula. For example, some climbers report that the alcohol-based formula can cause burning if your skin cracks while climbing. Since the isopropyl alcohol in the chalk mixture irritates the skin and causes burning, formulas without alcohol usually do not have the same impact.

Still, we would generally recommend the original formulation of Secret Stuff to most rock climbers, especially if you have sweaty hands. It’s great stuff, as long as your hands can tolerate it for more extended periods. It lasts a long time and provides unrivaled moisture absorption. If you struggle with eczema or dry hands in general, then opt for the formulation with no alcohol instead.

The Secret Stuff liquid chalk products are among the best (if not the best) for delivering superior grip, staying power, and respecting sensitive skins. We highly recommend it for bouldering and as a base chalk layer for your rock climbing routes.