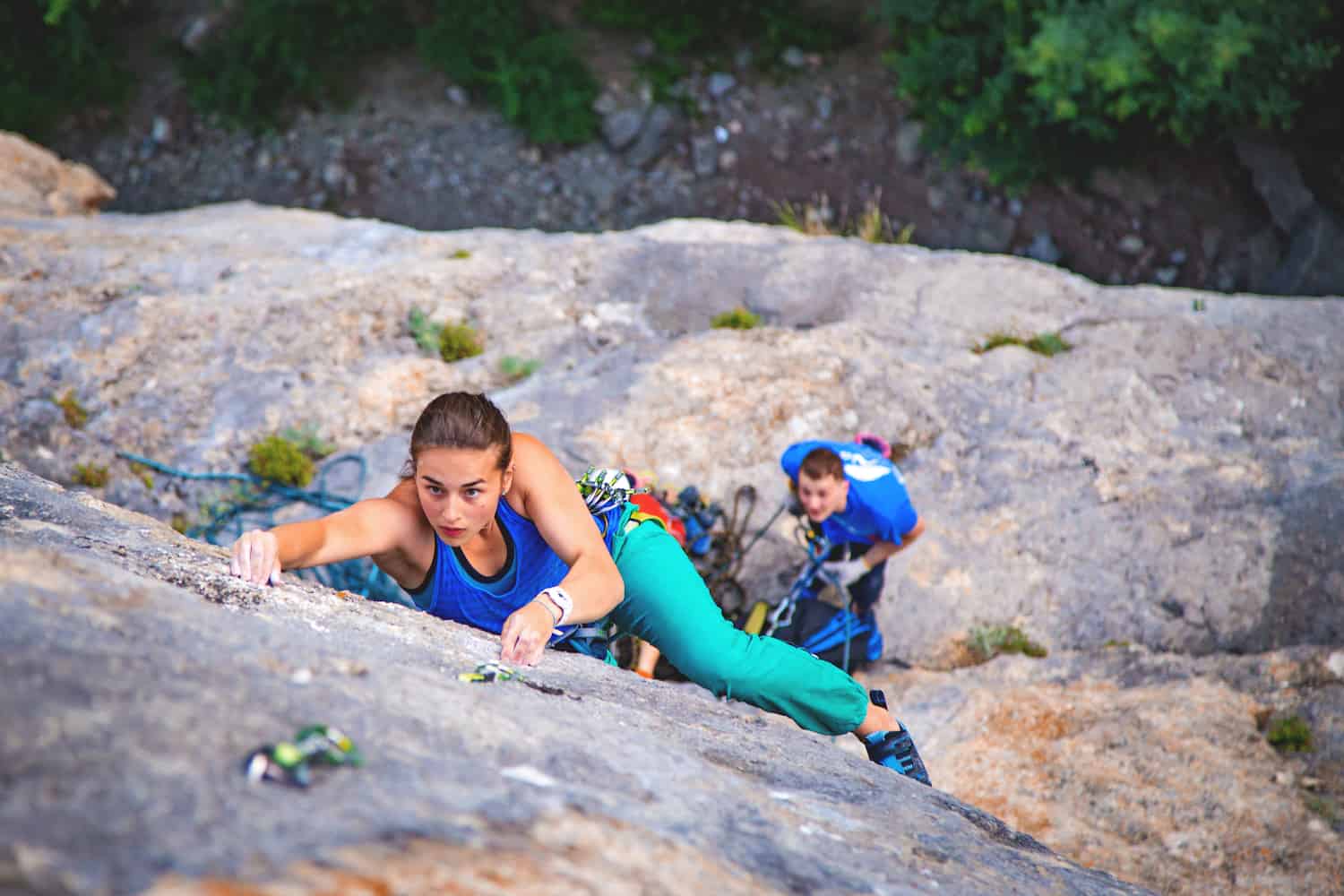 Editors note: This is the second in a series of three entries on trad climbing basics. The other entries can be found here and here.

You’re racked up and ready to go. Now comes the tricky part: climbing the route. Managing pro on a climb can make or break a send. But more importantly, wisely managing a climb helps ensure a safe outing.

Here are some tips for managing a trad climb.

1. Place gear with the rest of the pitch in mind. It can be very tempting to just toss in cams whenever the opportunity arises. But you need to keep a variety of gear available for the climbing that follows. If possible, avoid gaps in your rack. For example, don’t sink your #.75, #1, and #2 cams all low on the route when you may need a mid-size piece higher.

2. Try to keep key holds free of gear. This can certainly be easier said than done. Often a crack or seam will have good jams or finger locks in certain spots, while the rest of the feature is too wide or too thin to use. Try to utilize these ‘off areas’ to place gear. Parallels at Eldo’s West Ridge is a great example of the necessity to keep important features free of gear. In the middle of the crux, the climber can either latch the last finger lock, step up and then worry about gear, or plug the lone feature with gear and kiss any chance of sending goodbye.

3. Know when to climb and when to place. Sorry Eli, but I love this story. Like Parallels, Center Route (5.11) on Eldo’s Rincon wall has a cryptic crux through a blank section that ends after latching a high finger lock. On my onsight attempt of Center Route, I took a decent fall at the crux, probably 15 feet. Eli fell from the same spot and took a 25-foot whip. What was the difference? Did Eli neglect to protect something that I found? Was his belay not paying attention?

Actually, in his quest to lead climbs by continuously placing himself on toprope, Eli extended his lanky frame to the max to place a blind #0 C3 above the crux. As if this wasn’t hard enough, he then downclimbed half the crux, tried to get a quick shake and then went after it. When he fell, the C3 sounded like a gunshot when it popped out, leaving Eli with several extra feet of slack in the line. If he hadn’t bothered with the C3, his fall (if he took one) would have been significantly shorter. He sent Center Route on his second try without the high piece, no problem.

The moral of the story is to know when it pays to be aggressive. Sometimes fooling around with gear does nothing but pump you out and sketch you out when it would just be easier to pull the move.

Things to consider when deciding if a piece is necessary:
a. Do you have good pro below?
b. Is there good pro and/or easier climbing to be had above?
c. Can you fish in a decent piece quickly, or is it a fool’s errand?

4. Be aware of the follower. Not every route is perfectly straight. On routes that wander, it is important to place extra gear to protect the follower. This includes pro after cruxes. The follower usually must remove gear at the crux before establishing on easier terrain. If there is a traverse after the crux, the second could face a big whip.

In the above photo, Lizz is in the middle of the crux and has removed the pro that protected the difficulties. If I hadn’t placed a piece immediately after the crux, she would have been looking at a 20+ foot pendulum

5. Know when to extend pieces. If you place a nut that could pull due to the torque from the rope when climbing past, extend it. Extend cams when they may walk. Extend any piece that will cause significant rope drag. Don’t waste your time extending cams in uniform splitter cracks.

When in the heat of the moment, it can be difficult to think clearly about managing a climb. After gaining experience, many of these techniques will become common sense.